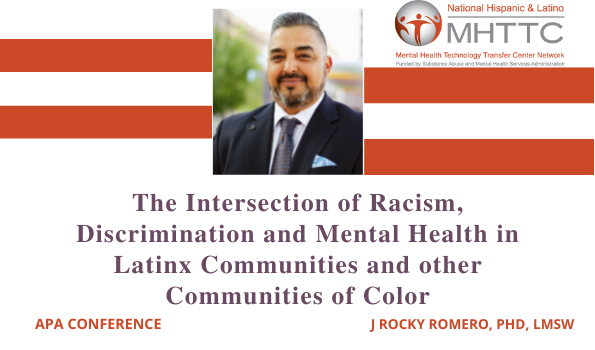 The Intersection of Racism, Discrimination and Mental Health in Latinx Communities and other Communities of Color

According to the latest US Census data, Latinos represent 18% of the US population. Although the US government uses the terms Hispanic or Latino to encompass a group of persons that share certain characteristics, including country of origin, Latinos in the United States are diverse regarding skin color and racial self-identification. The process of self-identification will vary among Latinxs according to family history, immigration experience, skin color, meanings attached to the history of colonization, acculturation, and other variables. In the United States, 92% of Blacks, 78% of Latinxs, 75% of Native Americans, and 61% of Asian Americans have reported experiencing racial discrimination in the form of racial slurs, violence, threats, and harassment. Conceptually, discrimination is considered a social stressor that gives rise to psychological distress, especially among marginalized populations such as racial/ethnic minorities and women. This notion is further evidenced by studies that point to an intersection between race, ethnicity, and experiences of racism and oppression. Given the complexities of ethnic and racial identification among Latinos and experiences of current and historical oppression, clinicians must adopt a culturally humble approach to working with Latinxs with mental health challenges. This presentation will address culturally responsive strategies for exploring ethnic and racial identification. The presenter will discuss providing a safe, culturally grounded space where participants can explore experiences of racism and discrimination and their possible relationship with mental health symptoms. A restorative justice approach will be promoted for clinicians working with Latinx populations.

Participation in the 2022 APA Conference.