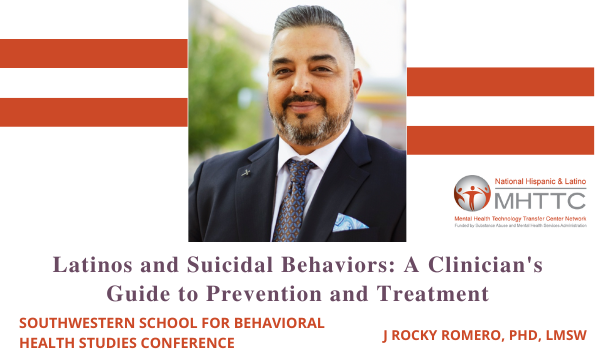 Latinos and Suicidal Behaviors: A Clinician's Guide to Prevention and Treatment

This clinicians’ guide addresses one of the largest cultural groups in the United States today, persons of Latin American ancestry, commonly referred to as Latinos or Hispanics. The guide considers suicide as part of social phenomena but our attention will be to suicides and suicide attempts as deeply psychological, emotional events. The emphasis is on what drives some people to think about suicide, plan a suicide, and attempt suicide. This guide is intended for mental health professionals and other health providers dedicated to delivering services to the diverse Hispanic or Latino population. It discusses suicidal behavior, demographics of the Hispanic population, risks for suicide, and prevention, intervention, recovery, and postvention. The guide includes two case studies of suicide attempts by teenage girls and questions for clinicians to consider in the assessment and intervention. Fifteen largest U.S. Hispanic groups by origin, based on self-described race and ethnicity. According to the Census Bureau, the Hispanic population in the United States reached 58.9 million in 2017, making it the country’s largest ethnic or racial minority and about 18.1 percent of the total U.S. population. Then in 2018, the Hispanic population grew by about 1 million to 59.9 million. Most of these Hispanics trace their roots to Spanish-speaking countries of Latina America and, to a lesser extent, Spain. Demographic projects indicate that Hispanics will grow to 111 million by 2060. Depending on where in the U.S. you practice, you will probably see groups with long-established communities in your region or newcomers creating new communities. Latinos are spread out across the country, arriving and settling mostly in historically receptive metropolitan areas.

Participation in the 2022 Southwestern School for Behavioral Health Studies.