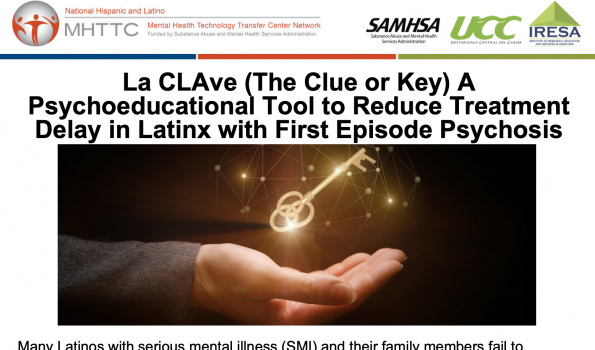 La CLAve (the clue or key) is a culturally responsive treatment for Latinx with a focus on reducing Duration of Untreated Psychosis (DUP) in patients presenting a First Episode Psychosis. La CLAve is informed by conceptual models of health literacy which include not only the patient but also patient’s family members or caregivers. La CLAve is a tool in Spanish that represents the symptoms of psychosis. The National Hispanic and Latino MHTTC´s: La CLAve (The Clue or Key) A Psychoeducational Tool to Reduce Treatment Delay in Latinx with First Episode Psychosis factsheet, is intended to provide a resource to providers to ease the suffering of Latinos with early psychosis and their families.