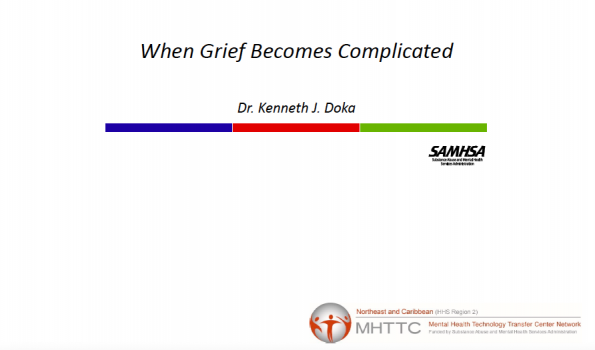 In this presentation, we describe varied forms of grief complicated contrasting them with manifestations of typical grief—and noting factors that make individuals at-risk for complications in the grieving process. We also describe varied evidence-based interventive strategies that have been used with individuals struggling with complicated grief. Finally, we note the ways complicated grief is acknowledged within the DSM-5 and the new diagnosis for Prolonged Grief Disorder that will be evident in the DSM-5-TR.

Dr. Kenneth J. Doka is a Professor Emeritus, The College of New Rochelle, and Senior Consultant to the Hospice Foundation of America. Dr. Doka has extensive experience in the area of grief, is a prolific author and speaker, providing keynoted addresses internationally.  Dr. Doka participates in the annual Hospice Foundation of America Teleconference and has appeared on CNN and Nightline. In addition, he has served as. a consultant to medical, nursing, funeral service, and hospice organizations as well as businesses and educational and social service agencies. Dr. Doka was elected President of the Association for Death Education and Counseling in 1993. In 1995, he was elected to the Board of Directors of the International Work Group on Dying, Death, and Bereavement and served as chair from 1997-1999. The Association for Death Education and Counseling presented him with an Award for Outstanding Contributions in the Field of Death Education in 1998 and Significant Contribution to the Field of Thanatology in 2014. In 2000 Scott and White presented him an award for Outstanding Contributions to Thanatology and Hospice. His Alma Mater Concordia College presented him with their first Distinguished   Alumnus Award. He is a recipient of the Caring Hands Award as well as the Dr. Robert Fulton CDEB Founder’s Award. In 2006, Dr. Doka was grandfathered in as a Mental Health Counselor under NY State’s first licensure of counselors. In addition, Dr. Doka is an ordained Lutheran Minister.